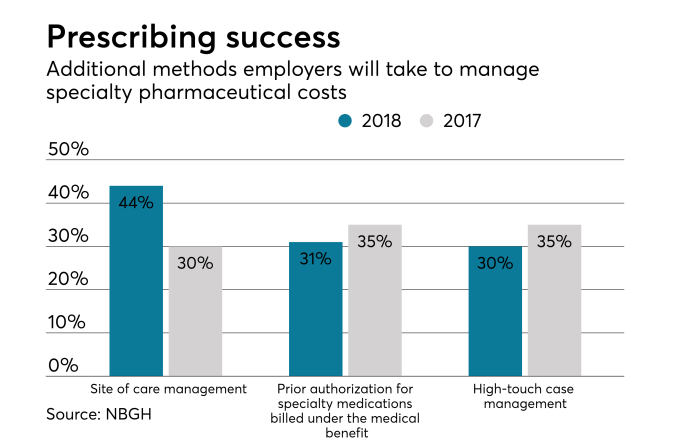 President Trump on Friday unveiled his blueprint to lower drug costs through increased competition, improved negotiation and creating incentives to lower list prices and out-of-pocket costs for consumers. While he called out certain players “in the middle” for their cost-driving behaviors, there’s a big problem with his recommendations: They do not place a priority on the use of pharmacy benefit management (PBM) drug rebates. Instead of this being considered an “immediate action” in the blueprint, it is indicated as a strategy for “further consideration.”

It’s alarming that restricting or removing rebates is not seen as an immediate priority, especially given U.S. Department of Health and Human Services Secretary Alex Azar’s acknowledgement that same day stating that “everyone’s benefiting from high drug prices except patients and taxpayers.” We add employers to this list of those not benefiting, as pharmacy spend is one of the key cost drivers for employers as healthcare purchasers.

Employers shoulder the burden of the rising costs by all stakeholders in the supply chain, especially PBMs. Employer-based insurance covers almost 56% of the U.S. population which means the private sector covers more people than Medicare and Medicaid combined. The current path is unsustainable and negatively impacts the ability of U.S. businesses to be competitive in an increasingly global economy.

Another burden the administration must address — and employers should pay closer attention to — are the current merger and acquisition activities resulting in mega-sized health plans and PBMs, wholesalers, pharmacies and pharmaceutical manufacturers.

Many of these groups have evolved into giant corporations that are sophisticated, organized and well-represented by industry groups who frequently lobby Washington to protect their position. Each player is looking for ways to maintain their negotiating power by leveraging scale and veering into territories they see as ripe for take-over or disruption. History has shown us that consolidation has not resulted in lower drug costs. In fact, the current economic model instead creates incentives to drive the price up while employers continue to quietly lose a lot of leverage because they are highly fragmented buyers.

Today’s employers need to unite by working together to become a driving force for change and using their market predominance to break down the barriers that prevent people from getting the highest quality, most cost-effective care. They must serve as catalysts in the way drugs are paid for and delivered, including an evidence-based formulary.

While we’re encouraged to see drug prices being addressed by the Trump administration, the government needs to take a harder stand on the pricing games that are being played. If we are not moving to completely removing rebates (and other negotiated fees) and paying lowest net cost, then, we at least need to negotiate rebates based on the drugs ability to produce improved patient outcomes. Also of note, it’s interesting that stock values increased for many drug industry stakeholders based on the administration’s comments — indicating that it’s not a threat to those in the middle.

Without placing a high priority on rebates and taking immediate action to address other chronic, egregious behaviors that directly impact health care purchasers, PBMs and players in the middle will continue to take advantage of the marketplace as they have for far too long.