U.S. employment plummets, ahead of surge in layoffs 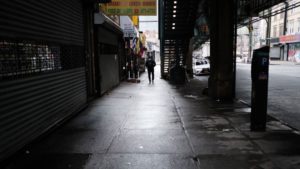 U.S. employment plummeted last month in the first decline since 2010, offering an initial look at the widespread devastation the coronavirus pandemic has already begun to wreak on the once-strong labor market.

Payrolls fell 701,000 from the prior month — compared with the median forecast of economists for a 100,000 decline — according to Labor Department data Friday that mainly cover the early part of March, before government-mandated shutdowns forced firms to lay off millions more workers.

The figures represent a dramatic shift from just a month ago, when job gains topped 200,000 and employers were having so much difficulty finding qualified workers that they were hiring previously marginalized populations such as people with criminal records. President Donald Trump has frequently touted strong employment figures as he runs for re-election this year.

But over the past month, the disease known as Covid-19 has rapidly spread across the U.S., killing thousands and leading an increasing number of states to encourage or order their citizens to stay home. That, in turn, has led to widespread business closures and millions of layoffs in a range of sectors.

Because the reference period for the jobs report is based on the 12th of the month, the March data captured only a fraction of the joblessness across America. Nearly 10 million people have filed for unemployment benefits in the last two weeks alone. Goldman Sachs Group Inc. sees the jobless rate reaching 15% by midyear, while Federal Reserve Bank of St. Louis President James Bullard said it may hit 30% this quarter.

“The abruptness with which the economy has taken this step down is so striking,” FS Investments Chief U.S. Economist Lara Rhame said on Bloomberg Television. “It’s like a hurricane but hitting the entire country at the exact same time.”

Congress and the Trump administration are trying to help individuals and small businesses rocked by the economic shutdown, with a loan program for small businesses getting off the the ground Friday and direct checks en route to many households in coming weeks. But the program that provides up to $350 billion in aid to small businesses, aimed at preventing further layoffs, has been mired with website glitches and a lack of communication with lenders.

“Workers who were paid for just a few hours during the early part of the month were still counted as a nonfarm payroll, so the March data are only an early snapshot illustrating the start of unprecedented job losses — in terms of both speed and magnitude — in the economy. April job losses will be at least 30 times larger, in the vicinity of 20 million. Unemployment will soar toward 15% next month,” said Carl Riccadonna, Yelena Shulyatyeva and Andrew Husby.

Employment in leisure and hospitality was hit particularly hard, falling by 459,000 in March, wiping out two years of job gains. Private payrolls overall dropped by 713,000.

Average hourly earnings rose 0.4% from the prior month and were up 3.1% from a year earlier, both above estimates — and potentially due to the removal of low-wage workers from the ranks of the employed.