Time to fly the nest: How young adults can find financial success 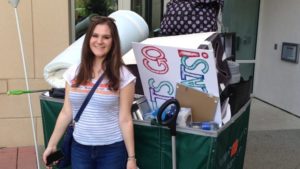 There’s something to be said for living with mom and dad. In fact, more and more young adults are opting to do just that thanks to things like student loan debt and high rents.

Yet, there comes a time when they need to strike out on their own and become financially independent.

Stephanie Einseberg is working towards that goal. She moved in with her parents after graduating from New York’s Binghamton University in December 2017. More than two years later, she’s still in her parents’ White Plains, N.Y. home.

“I would love to move to Manhattan and get a roommate, but it’s also extremely expensive,” the 24-year-old freelance graphic designer said.

She’s not alone. More than 14 million millennials still live with one or both parents, according to a 2019 survey by real estate website Zillow. It’s the highest share for the age group since at least 2000.

Another 2019 study, by TD Ameritrade, found that 50% of young millennials planned to move back home with their parents after college.