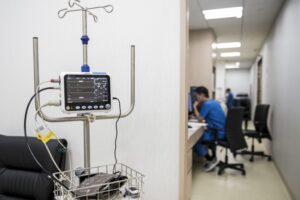 As one of the weirdest presidential election campaigns in U.S. history, conducted in the midst of a pandemic and a pandemic-induced recession, runs its course, the big issue that has come to the fore has been the uniquely expensive and at the same time clearly inadequate healthcare system.

Increasingly, as tens of millions of workers lose their jobs in the pandemic-induced recession, Americans of all political stripes are questioning the employer-sponsored health benefits model that has dominated health insurance coverage in the U.S., and are looking much more favorably at some kind of government-funded program like what erstwhile Democratic presidential candidate Bernie Sanders was promoting.

As support for Sanders plummeted in March, the COVID-19 pandemic has continued to make his signature proposal — expanding Medicare at least temporarily to fully cover the medical expenses of every American — increasingly popular. This has led some political analysts and economists to say that politics and economic necessity are going to make some version of single-payer health coverage in the U.S. likely in the not so distant future. This would be particularly the case if Democrats succeed in winning the White House and Congress this November. Former Vice President Joe Biden, the presumptive Democratic presidential nominee who spoke against single-payer in the primary debates, has lately suggested moving in that direction by lowering the age for Medicare eligibility from 65 to 60. More recently, he and his staff have begun talking about the need for a Democratic administration that will have to be “more ambitious than FDR.”

But even should Trump and Republicans win in November, with the health insurance industry warning it could have to raise premiums by 40% because of coronavirus treatment costs, even a second Trump administration may have to look at alternative government solutions to healthcare delivery going forward.

For the $215-billion employee benefits industry, such a shift could be a huge financial blow. Still, some people who have had experience with both the U.S. system and the single-payer Medicare program in Canada suggest the shift wouldn’t be fatal.

Ned Havern, president of Havern Benefits Strategy LLC, a 10-broker firm based in Boston, says, “Moving from our current system of private insurance to a government-owned insurance system like Medicare for All would be a big shake-up to this industry to say the least.”

Havern, a broker himself with a book of several million dollars, explains: “I would say for the typical broker, selling health insurance to employers is at least 80-90 percent of your compensation in the U.S. And if you’re not bringing in the premiums, staying in business will require a big modification in the value proposition you’re presenting to clients.”

He predicts that a shift to single-payer healthcare financing in the U.S. would lead to “a big consolidation in the employee benefits business.”

As an illustration of what can happen, he notes that some years back, when Blue Cross made a change in how it reimbursed brokers for plans sold to companies with fewer than 50 employees. The major insurance firm, which operates in all 50 states, shifted compensation paid for programs sold to those smaller firms from a percentage of premiums paid to a per-head fee per covered employee. As a result of that shift about 30 percent of the brokers in that space were driven out of business, he recalls. Larger firms meanwhile, simply dropped out of that part of the business, leaving it to surviving smaller brokers to go after what was lower-margin and harder-to-win and to service contracts.

A full-scale move to single-payer healthcare, he predicts, would lead to a far more massive industry shake-up.

“People in this industry know that this shift to a single-payer system could happen. They’re not preparing for it yet, because they know if it does happen it won’t be overnight. There will be time to prepare for it. But they are certainly talking about it,” he says.

For Havern’s own business, the impact would be dramatic. Havern Strategies primarily serves Canadian companies that are opening or expanding operations in the U.S., and that need to obtain competitive health coverage for their U.S employees and even for any of their Canadian employees who might be moved to a U.S. operation (since Canada’s Medicare Program only covers the costs of care obtained within Canada).

“Right now we’re in a great niche,” he says. “That’s educating Canadian decision-makers about the coverage norms in the U.S., and explaining that healthcare coverage for their workers in the U.S. will cost them about nine times as much as covering a similar worker in Canada.” He adds, “Obviously, healthcare coverage is a big part of the conversation for companies considering setting up operations in the U.S.”

Bryan McDonough, director of benefit programs at HUMI, a privately held Canadian employee benefits and payroll software provider based in Toronto, says that while the industry certainly went through some hard times adjusting when Canada’s health system switched from a private insurance model to a government single-payer model in the mid-1970s, today its brokers, most of whom like fellow brokers in the U.S., operate on commission, “do quite well.”

Because healthcare-related benefits only cost one-tenth what they do in the U.S., he says Canadian brokers focus their business on other types of employee benefits that are not covered by Canada’s single-payer Medicare program. These would include dental, drug and long-term care coverage, and travel insurance. That last item is popular, for example, among the many Canadian “snow-birds” who like to ride out the worst of winter in the southern U.S. — especially Florida — and don’t want to be caught there having to spend their own money paying for an unexpected hospital stay. Canadian benefits brokers also get into market areas like life insurance, annuities and retirement plans. “A lot of employee benefits brokers will also partner with people who do investment planning, or offer that service themselves,” he says.

Of course, this being the United States, should some kind of single-payer healthcare program be established in the coming years to replace the current private/public hodgepodge of a system, this would not mean all the 250 million Americans who have private insurance coverage either through employers, independently, or as part of their Medicare coverage (for Parts B and D covering doctors and drugs), would be switched to government insurance. Congress might very well opt to leave drugs and long-term care to the private sector as is done in Canada. If private hospitals and private physicians that wanted to charge more than the government plan offered in reimbursements for service were permitted to do so, as in the UK, there could also still be, as in the UK, private insurance plans which some companies might choose to offer to some or all of their employees as a part, or as an optional part, of their benefit packages.

In any case, with the coronavirus pandemic still piling up bodies, filling hospitals with sick patients, and driving up both health care costs and private insurance premiums for employers and employees, the pressure to consider some kind of single-payer government health insurance alternative will be strong whichever party wins control in Washington after Nov. 3.

The employee benefits industry and its brokers ought to be watching developments carefully and thinking about how to deal with the impact of any changes.