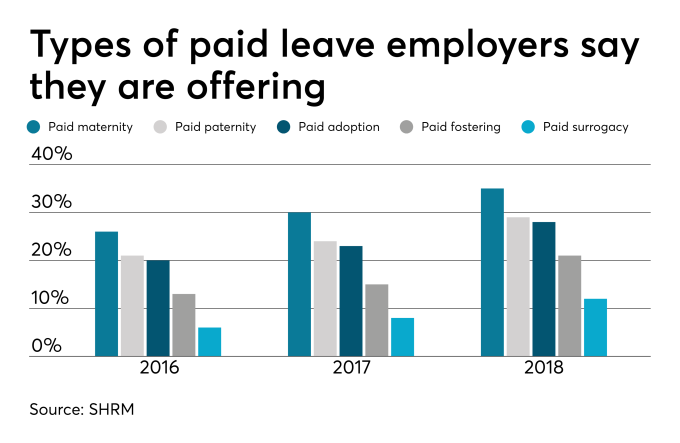 While the U.S. is the only developed country in the world without a federal paid leave policy, more states are passing laws mandating paid time off for workers to care for new or ailing family members.

“In 1991, as an advocate for the Women’s Rights Coalition, I first began working on paid family leave,” says Oregon governor Katy Brown. “Now, we can finally tell parents that they no longer will have to worry about losing their pay when they are having a baby or need to care for a loved one.”

Oregon’s new law will go into effect in 2023 and is one of the more generous state offerings for low-income workers. The legislation gives those whose weekly wage is equal to or less than 65% of the state income level, 100% of their pay — capped at $1,215. The law will be funded through a small payroll tax.

Federal legislation for paid leave could be on the horizon. During his State of the Union address in February President Trump called for a federal paid family leave law to give parents a “chance to bond with their newborn child.” In the beginning of April, Sen. Bill Cassidy, R-La., announced he would work alongside Sen. Kyrsten Sinema, D-Ariz., to develop a paid parental leave bill. Details of both plans are still scarce, and many employers are against a federal mandate out of fear they will be locked into funding it through tax increases.

Regardless, employers are beefing up their own paid family leave policies. Target, Sweetgreen, Bloomberg and Hewlett Packard Enterprise are just a few of the companies that boosted their benefits this year alone. More employers are adding the benefit because of an influx of millennial workers, writes Anna Steffeney, founder and president of LeaveLogic in a column for Employee Benefit News.

Steffeney says she is confident that the U.S. is getting closer to federal paid family leave legislation as more employers, municipalities and states develop their own policies. Upcoming elections and pushes for gender equality are all helping to gain traction for federal paid leave — but the timeline is still unclear.

“I’m optimistic we’re getting closer to an effective paid family leave policy. But the question is: When?” she writes.