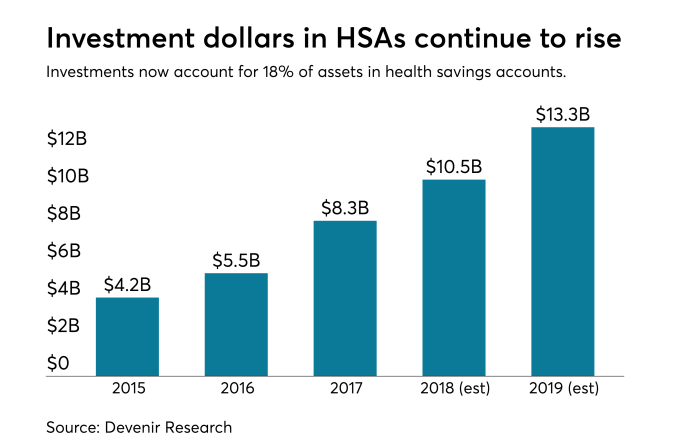 Health savings accounts are rising in popularity as more employers turn to high-deductible health plans as a means of saving themselves and their employees money on healthcare.

Fidelity Investments says that in 2017, 112 new employers began offering health savings accounts to employees and that the company saw a 50% increase in the number of new HSA account openings from 2017, growing Fidelity’s portfolio to 837,800 individual HSA holders with $3 billion in assets.

Jeanne Thompson, senior vice president, thought leadership, workplace solutions for Fidelity Investments, says that one in four people who have access to a health savings account at work are now participating in it. When employers only offer an HSA-eligible health plan, nearly half of employees put money aside in an account.

But despite the growing numbers of participants who use an HSA account, there are many people who don’t understand how the plans work: mainly that if you don’t use the money, you don’t lose it. In fact, you can invest any leftover money in the plan to help pay for future medical expenses. The majority of HSA holders at Fidelity leave their money in cash rather than investing it. In 2017, 92% of account holders had all of their money in cash and only 8% invested it.

Fidelity is working hard to educate people on the triple tax benefits of using an HSA. Most people don’t realize that money goes into the account tax free. That balance grows tax free and it comes out tax free if it is used for qualified healthcare expenses.

The average balance as of 2017 was $3,837, which seems relatively low, Thompson says, because a lot of people are using their accounts to pay for current year medical expenses. That figure also is dragged down by the large number of newly opened accounts that have a zero balance, which makes that figure misleading.

When Fidelity looked at HSA balances for accounts that have been open for five years, the average balance was $9,052.

Account balances fluctuate depending on what is going on in a person’s life. Some years, they will bank all of their HSA funds and others they will use half or all of what they have saved. The individual savings limit is $3,450 a year. The family limit for 2018 is $6,900. Those over age 55 can contribute an additional $1,000 a year to their HSA.

“We found that 39% of employees think that if they don’t use all of their HSA money they will lose it at the end of the year,” says Thompson, and almost half don’t know they can invest their HSA money.

Many companies are attempting to rectify this problem by providing brochures and onsite education about HSAs at their annual benefits enrollment events.

“For those employers who really built a campaign, with workshops and onsite meetings, around this, they have seen great results,” she says.

Employers are becoming more interested in HSAs and high-deductible healthcare plans because the cost of health care premiums has outpaced inflation, Thompson says.

“I think the challenge or hesitation they have is, are employees going to engage in it and understand it?” she adds.

As employers moved away from defined benefit pension plans to defined contribution plans, the onus of retirement plan management shifted from the employers to their employees.