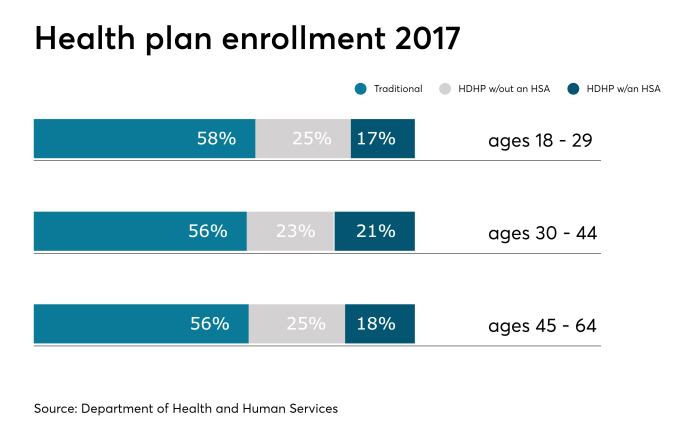 High-deductible health plans are gaining ground on traditional insurance plans, according to a new report from the Centers for Disease Control and Prevention.

Over the past 10 years, adults aged 18 – 64 with employment-based coverage have increasingly opted for high-deductible health plans both with and without health savings accounts. The percentage of adults enrolled in plans without an HSA jumped to 24.5% in 2017, up from 10.6% in 2007. The percentage also increased for those enrolled in plans with an HSA, rising from just 4% in 2007 to 18.9% in 2017.

Meanwhile, enrollment in traditional plans dropped to 56.6%, down from 85.1% a decade ago.

The uptick in high-deductible plans may have to do with employers offering them more, sometimes as the only health insurance option, according to Paul Fronstin, director of Health Research at The Employee Benefit Research Institute. The plans, he says, are especially attractive to employers looking for easier ways to decrease insurance premiums or slow premium growth.

Rather than change health insurer, network, or services provided under traditional plans, it’s much easier to increase deductibles. “Relative to everything else, it’s easier. You’re not going to affect employee relationships with their doctors if you change networks or insurance companies,” Fronstin says.

For example, almost one in four employees (23.9%) with a bachelor’s degree or higher chose a high-deductible plan with an HSA. In contrast, only 10.7% of employees with less than a high school education did the same.

The estimates in the report are based on data from the National Health Interview Survey, which is conducted continuously throughout the year by the National Center for Health Statistics.