Hiring freezes are an underrated threat to the economy 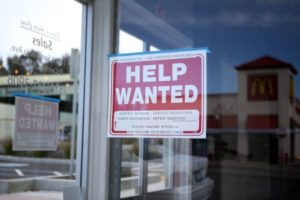 With all the focus on the surge in U.S. layoffs, it’s easy to forget that there’s a silent job killer lurking in the background. Hiring freezes such as that reported by American Express mean that the take-up of workers is falling rapidly. How quickly companies ramp hiring back up will be a large factor in the strength of the recovery.

The historic levels of initial unemployment claims illustrates the human consequences of a sudden stop of economic activity. Whole sectors of the economy have simultaneously shut, throwing millions out of a job. The leisure and hospitality industry along with non-food retailers have been especially hard hit.

The rapid fiscal response will help cushion the blow for these newly unemployed workers. The expansion of unemployment benefits means that some laid-off workers might be able to receive more than 100% replacement income, a major expansion of the safety net. In addition, the Small Business Administration will be pushing out forgivable loans (essentially grants) to help retain employees that would otherwise be forced out of work.

Enhanced unemployment benefits will help affected workers put food on the table, and pay the rent, providing important support for the economy. The SBA loans will help maintain employer-employee relationships so that activity could in theory ramp up quickly once restrictions end.

These policy responses will not fully resolve the upcoming threats to the labor market. Job separations such as layoffs and quits represent only part of the picture. Hiring is a critical part. During recessions, not only do layoffs accelerate, but hiring drops sharply, exacerbating the labor market weakness.

There were 5.2 million people hired in November 2007, one month before the last recession began. Hires fell to 3.6 million at the low in June 2009, a swing of 1.6 million. In contrast, layoffs and discharges rose from 2 million in November 2007 to a peak of 2.7 million at the peak in April 2009, a swing of 700,000. In other words, the drag on the job market from the drop in the pace of hiring was well above the drag from a faster pace of discharges.

The dynamics in this recession will look different with a mass of layoffs and discharges coming early. Still, the lack of take-up of new employees will certainly exacerbate the deterioration in the labor market even as the initial round of layoffs slows. I call this the “silent job killer” because news of hiring freezes garners much less attention than layoffs.

The willingness of firms to hire on the other side of the shutdown will help determine the shape of the recovery. After the 2007-09 recession ended, hiring did not return to its November 2007 level until December of 2014.

The hope of course is that employer-employee connections remain sufficiently robust that activity and hiring snap back quickly when the shutdown ends. The reality may be different. The economy will suffer greater and more persistent damage the longer the shutdown lasts. Government support is unlikely to compensate for a lack of customers indefinitely.

Moreover, there likely will not be a hard-restart of activity. More likely is that activity will be phased back in over time. Conferences, sporting events and other events with large groups may be curtailed far into the future. There is also the possibility — if not likelihood — that sporadic outbreaks of the virus will result in rolling shut-downs of venues or regions until Covid-19 treatments or a vaccine becomes widely available. China recently shut all movie theaters again. Such an uncertain environment will likely cause firms to hesitate before ramping up hiring even after the height of the crisis passes.

Assuming virus-related concerns will persist over the next year or longer, we might expect a “square root” type of recovery. After an initial jump of hiring that follows the first phase of recovery begins, a less-than-full resumption of activity and uncertainty about future shutdowns threaten to restrain the pace of hiring long into the future.

The layoffs associated with this initial shock will eventually slow but that alone will not put us on the path to recovery. We will need firms to not only stop letting workers go, but to return to a rapid pace of hiring. If that doesn’t happen, we can expect another long, slow recovery.