Culture is what employers ‘do when no one is looking’ 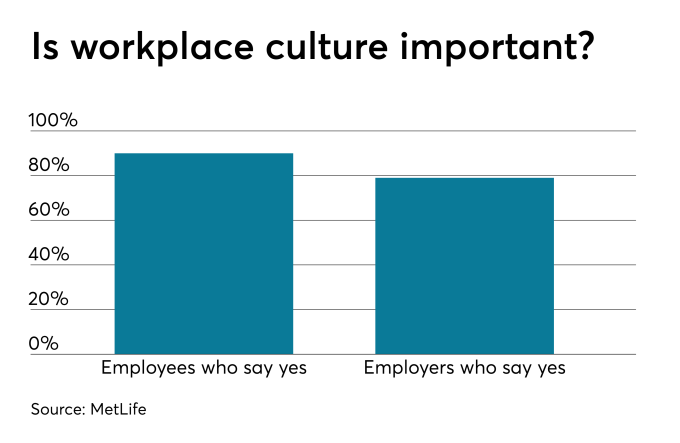 Employers advertise their values to attract like-minded talent, but if organizations don’t practice what they preach, they risk watching that talent walk right out the door.

Second to compensation, company culture is one of the primary reasons employees leave a company, according to the 2018 Jobvite Job Seeker Insights Survey. A good fit is so important that 30% of job seekers left brand-new positions after just 90 days because they didn’t like the company’s culture, the study said.

“It’s interesting that people think about culture in terms of what they want it to be, not what it actually is,” Mita Mallick, head of diversity and cross-cultural marketing at Unilever, said Wednesday at the Greenhouse Open Conference. “Culture is defined by what you do when no one’s looking.”

“Creating an environment where women and people of color feel comfortable needs to be a priority,” Turner said. “Including their voices is how you make that happen.”

Turner recognized that some marginalized employees won’t feel comfortable speaking up about problems with company culture — especially if they have less job experience. Mallick and Turner said it’s helpful for these employees to find allies in senior level coworkers who can advocate for them.

“Early in my career, I know I didn’t feel comfortable raising my hand and saying, ‘That’s not OK,’” Mellick said. “I’m much more confident now.”

Mallick spoke about a time when she felt she needed to step up for employees who are mothers. Unilever was in the middle of planning a new campus in New Jersey, complete with a mother’s room for nursing. After viewing the plans, Mallick said it was clear the designers didn’t ask any of their female employees what they’d like to get out of the room. From her own experience as a mother, she said it would be most helpful if the room also functioned as a co-working space; the plan she was presented with didn’t have those elements.

“I asked [the men], ‘Have you ever nursed before?’ And, of course, they said no,” Mallick said. “Some of the men were getting grouchy, saying they were just trying to do the right thing. But that’s just an example of failure in not trying to connect who you were trying to serve.”

“If you don’t, it happens organically,” Mallick said. “There are people who will try to fill the culture.”

Turner spoke briefly about Google’s transition from startup to global enterprise, a change that required the company to redesign its culture. She said Google was able to bridge traditional office hierarchies with Google’s original culture by training managers to act like coaches. The founders hoped this management structure would perpetuate their original value — teamwork.

“Our founders felt uncomfortable with the word ‘management,’” Turner said. “But you need it at larger companies to organize jobs.”

“Sometimes there are some bad actors who continue to slip by without living by your company’s values because they produce results,” Mellick said. “It’s important to listen to employee feedback, because these productive jerks can be an overpowering force that creates fear in your workforce.”

Turner said employers who are serious about their company’s core values need to conduct regular performance reviews for managers, and take their lower-level employees’ feedback seriously.

“We want our leadership to stand up for us and believe what comes from their mouth,” Turner said. “If leaders don’t live by [the company’s] values, how can the culture be that way?”